Acend are once again kings in Europe after a dominant display on Wednesday’s EU Pro Series.

Sweeping through the bracket, the Acend side only dropped a single map on their run to the first title of the season and extending their long winning streak in European competitions. The map in question that they dropped was to one of the most impressive teams of the day, The Lads.

NAVI continued their upwards trajectory fresh from their Raleigh Top 8 performance with a Grand Finals appearance, but Acend were too strong for them losing 3-0 on both meetings.

As mentioned, The Lads were maybe one of the biggest talking points of the day. An impressive run that seen them finish Top 3, beating teams like Mock It and WhoKnows combined with a great win over Quadrant, 2-1. A team formed recently, but already breaking the Top 3 dominance that Acend, NAVI and Quadrant enjoyed in the opening month of competitive European Halo.

Quadrant will likely be disappointed with the Top 4 finish given the high standards the team hold themselves in combined with a good showing at Raleigh. No doubt this French roster will come back even stronger in the next Pro Series.

Mock It will be happy with their progress in European Halo with a Top 6 finish alongside HMCA who fell 2-1 to Quadrant in the battle for Top 4 on the losers side of the bracket.

WhoKnows along with Gambit nFriends made up the Top 8 securing their places for the next pro series in a good competitive day for the European Halo scene.

European Halo is treated to two tournaments this weekend with Saturday seeing the first cup in the EuropaHalo road map correctly named the “Kickoff Cup”.

On Sunday the Open series is back with 8 places up for grabs in the next Pro Series on Janurary 12th. 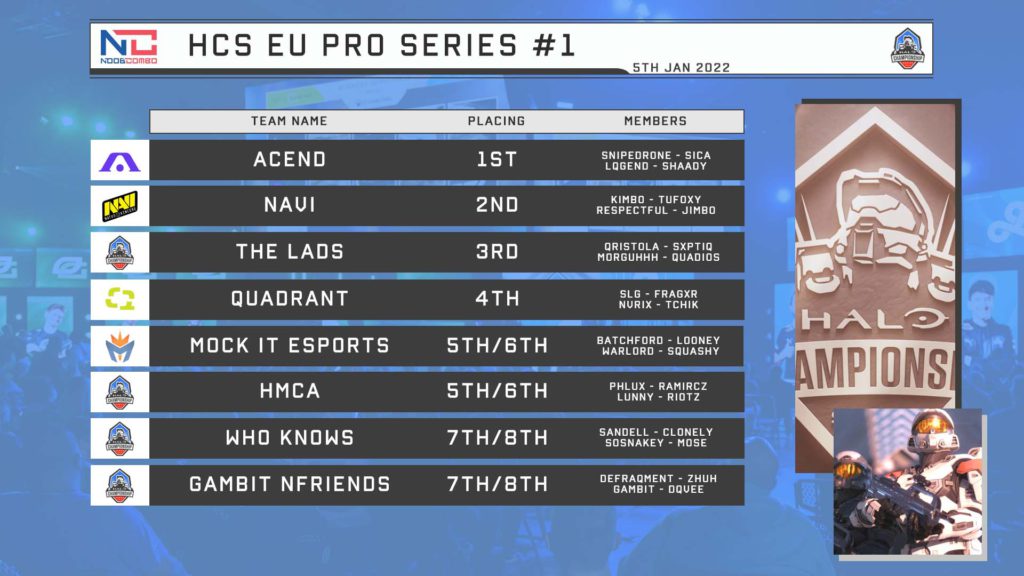 The 2021-2022 HCS Season has officially kicked off this past weekend with the Open Series. Over 550 teams from every region competed in the two-day event to try and earn as many HCS Points as […]

After some roster changes that took place since last week, it was time to get a look at how they would work out in this week’s EU Pro Series. Respectful was now playing with Acend, […]