The time was now for the HCS Mexican Pro Series. The four teams that earned a spot in the Pro Series will now face off against the best teams in the region. Altar Esports, Timbers Esports, CN Singularity, Enchiladas, Cruelty, Rebel, Fire N Ice and the reigning region champions, Pittsburg Knights, would battle it out to determine which is the best team.

One of the new and favorite teams is Timbers eSports. The only team in the region that has a Colombian player, PeluGod, the team began by showing their dominance by defeating Rebel and then Fire N Ice in Winners Semifinals.

Likewise, Pittsburgh Knights would defeat CN Singularity and then Cruelty in the Winners Semifinals maintaining the perfect record that they have had so far. In Winners Finals PK showed their might, sending Timbers Esports to the Losers Bracket. They would now wait for their rivals in the Grand Finals.

In the Losers Bracket, Enchiladas surprised everyone, eliminating Fire N Ice but then after some closes matches, were beat by Cruelty. Losers Finals was between Cruelty and Timbers Esports and ended 3-0 in favor of Timbers Esports.

In the Grand Finals PK lost their perfect match record, dropping a map against Timbers Esports, but were able to take the championship with a score of 3-1 and remaining at the top of the region. 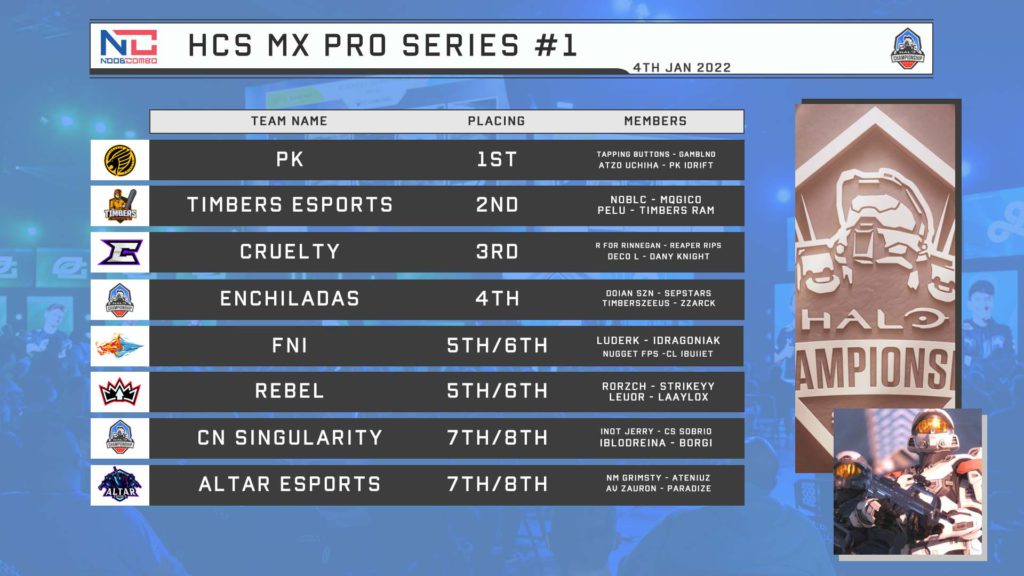 Link to Waypoint of Tashi’s Designing the Esports Ecosystem blog for July including information on which platform/input device will be used for tournaments and more.

Link to Tashi’s Designing the Halo Esports Ecosystem blog on Waypoint containing information about Teams in the HCS.

Only one spot guaranteeing Pool Play at the Raleigh Major was up for grabs in the ANZ region. The favorite, Nutribullet, hadn’t lost a series in the first two Opens leading up to today’s tournament […]