The Top 8 North American teams from the HCS Major in Raleigh and the Top 8 teams from the NA Open Series that took place on January 2nd competed in the first HCS NA Pro Series this past Thursday. Teams that did not finish in the Pro Series Top 8 are relegated back to the Open Series, where they will then have to place Top 8 in order to get back into the next Pro Series tournament.

Spacestation Gaming pulled the biggest upset of the tournament, eliminating OpTic Gaming in Losers Round 2 before being eliminated themselves by Oxygen Esports in Losers Round 3. Fighting for the other Top 8 spot, the Pioneers, who got their first loss from FaZe in Winners Round 2, faced off against Built By Gamers where they too were upset and sent home.

In Losers Round 4, BBG and Oxygen both received their second losses from Sentinels and eUnited. The latter two would go head-to-head in the Losers Semifinals, but it was the Raleigh runner-ups that came out on top.

eU moved on to Losers Finals where they got a rematch against FaZe Clan. FaZe had sent eU to the Losers Bracket in Winners Semifinals and hadn’t lost a map until Winners Finals, where Cloud9 swept them, 3-0. Both teams split the first two maps, but FaZe were able to defeat eUnited for the second time this tournament and get their rematch against Cloud9.

The Grand Finals was a best-of-five series. The first map, Streets Strongholds, went the way of Cloud9, 250-219. Map number two, Recharge Slayer, was a close one but also went to C9, 50-48. Bazaar CTF was the third map and went to time with Cloud9 winning 2-1 and maintaining their dominance as the top team in the HCS. 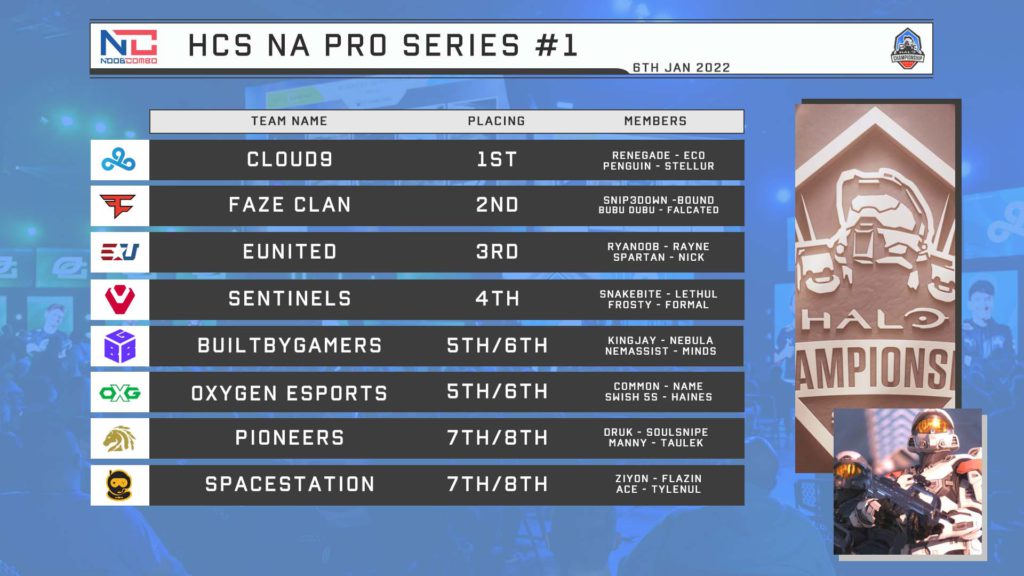 The first Season of the Halo 5 Pro Series has wrapped up in North America. The Top Eight teams from the second Pro Tournament competed in a Group Stage followed by a single-elimination bracket to […]