Team Immunity emerged onto the scene in this week’s ANZ Pro Series, making their mark with a roster featuring a Halo esports legend. However, Divine Mind and The Chiefs remained firm at the top.

BBR and 1620 Kings had tough first round opponents, going up against Divine Mind and The Chiefs. They were both sent to the Losers Bracket where 1620 Kings faced Mindfreak and BBR faced Frxgrs. That is where their tournament ended, though, with both teams placing 7th/8th.

Frxgrs moved on to compete against Team Immunity while Mindfreak was up against Dire Wolves in Losers Quarterfinals. Although Frxgrs were able to take one map off of the newcomers, they were sent home losing the series 2-1 while Dire Wolves swept Mindfreak 2-0.

Third place was on the line for Dire Wolves and Team Immunity. Both teams took one map off of one another, but Team Immunity won the third map, Aquarius CTF, and the series 2-1. They awaited their opponent in Losers Finals, guaranteeing at least a third place finish.

Divine Mind had fallen to The Chiefs in Winners Finals, 0-3, and now found themselves facing OGRE 1 and the new kids on the block in a best-of-five series. Divine Mind won the first map, Recharge Oddball, dominantly with DM holding Team Immunity to only 17 second of ball time. Team Immunity answered back in Live Fire Slayer, taking the map 50-47. Streets Strongholds was the third map and once again, Divine Mind won handedly, 250-54. Team Immunity’s tournament life was on the line in Bazaar CTF, the fourth map. The game went to time with Divine Mind winning, 3-1, sending Team Immunity packing but not after they made a statement in their first Pro Series.

Divine Mind has fallen short of defeating ANZ titans, The Chiefs, multiple times and were once again finding themselves up against them in the Grand Finals. Live Fire Oddball started the series off and went to a third round, but The Chiefs were victorious winning 2-1. Divine Mind claimed the second map, Aquarius Slayer, 50-39, tying up the series 1-1 going into map number three, Streets Strongholds. The Chiefs managed to hold DM to less than 100 points in the map, winning 250-80 and were now one win away from remaining the Champions of ANZ. The fourth and final map was Bazaar CTF. The Chiefs managed to capture four flags before Divine Mind captured their first with less than two minutes left. The game went to time and The Chiefs once again were the ANZ Pro Series Champions. 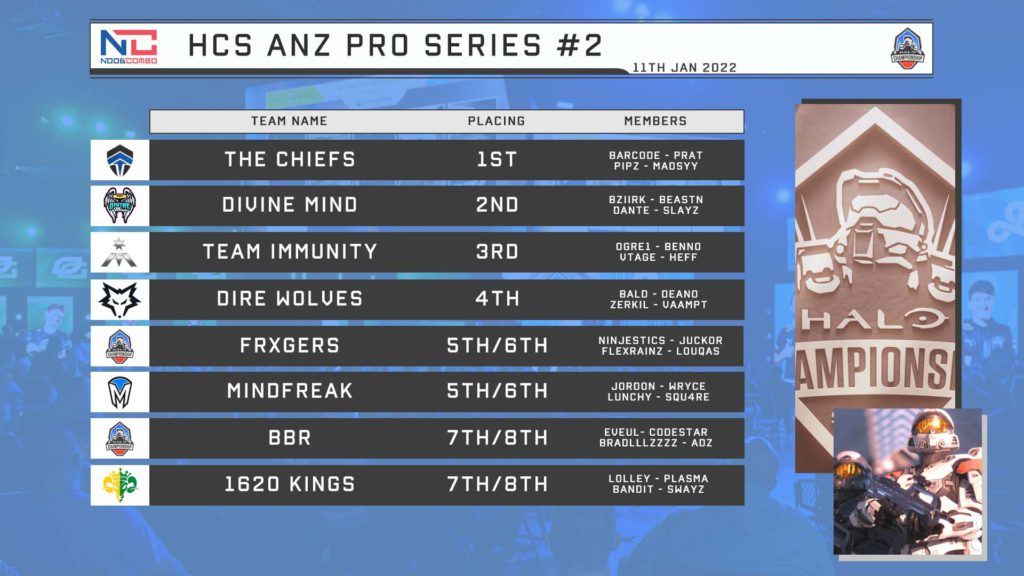 The Chiefs went out with a bang before the Pro Series break. They won this week’s ANZ Pro Series, which was the last one until May 31st. Don’t worry though. In between now and then […]

Season 2 of the Halo 5 Pro Series kicked off in all regions today. You can find the Top Eight results and brackets from each tournament down below. For more information, click on the FACEIT […]

The final Pro Tournament in the Halo 5 Pro Series has concluded and the stage is set for the Season 2 Championship. The tournament started off with the Group Stage where the top two teams […]