This week in the MX HCS Pro series, the four teams that maintained their spots in the Pro cup: Pittsburg Knights, Fire N Ice, Timbers Esports and Altar Esports, would face the new teams that earned a chance to participate. Those teams were Dream Conspiracy, Creulty, IGNIS Esports and Rebel.

The tournament started without any novelties. The pro teams advanced to Winners Semifinals without difficulty. In the first Semifinal, PK won over FNI with a solid 2-0. Much the same, Timbers Esports got the victory over Altar Esports. Winners Finals started off franticly with Timbers Esports winning the first map, but then PK made a comeback and won the series 2-1.

In the Lower Bracket we had incredible matches with very close games. In Losers Semifinals FNI beat Altar Esports 2-1, but they would later lose to Timbers Esports in Losers Finals by the same difference. Timbers Esports would get their rematch against PK again.

In the Grand Finals with a highly focused team, the Pittsburg Knights took the victory with a resounding 3-0 and maintained at the top of the MX region. 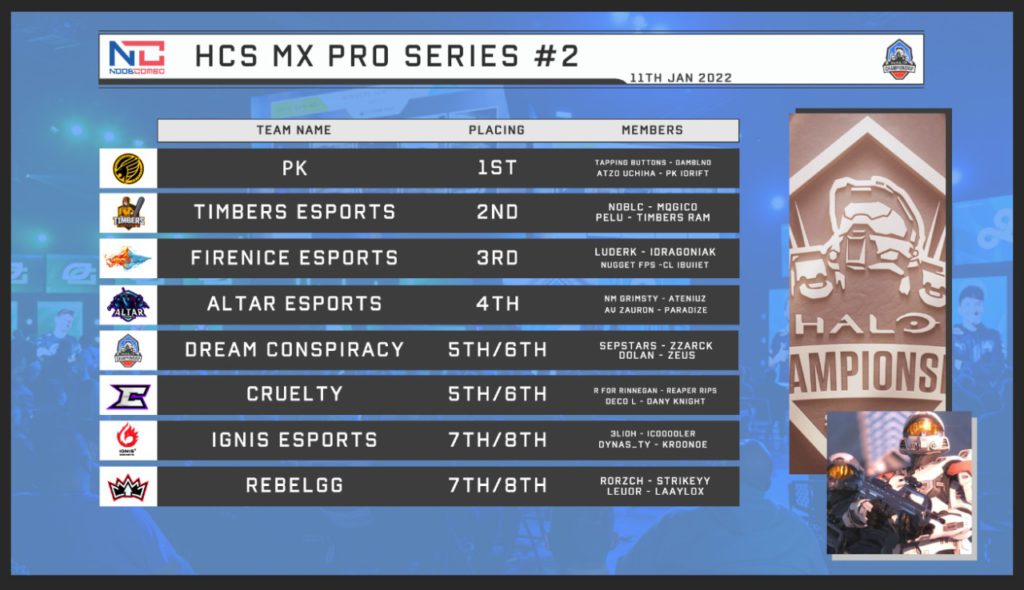 The first chapter of the Halo 5 Pro Series has come to an end as the Season 1 Championships in the ANZ, EU, and LATAM regions took place today. Below, we’ve posted the results from […]

No you eyes aren’t misleading you. In this week’s Halo 3 MCC Pro Series tournament, the two teams that have been battling it out between first and second place for the duration of the MCC […]