Some new teams entered the fray in the second North American HCS Pro Series, but the Top Eight largely remained the same as the first.

Starting with the Losers Round 3, Kansas City Pioneers found themselves up against BBG after losing their second match against eUnited and beating G2 in their third. Unfortunately for them, BBG were able to win Aquarius CTF 4-2 and Streets Slayer 50-48, sending KCP out with a Top Eight finish. The other LQF matchup was Spacestation Gaming vs OpTic Gaming where SSG suffered the same fate as KCP. OpTic took Aquarius CTF 3-2 and Streets Slayer 50-43.

Advancing to Losers Quarterfinals BBG was now up against XSET, who received their first loss from Cloud9 in Winners Semifinals. OpTic also had advanced and faced eUnited, who had lost to FaZe 1-2. XSET had BBG’s number this tournament, delivering them their second loss (first was in Winners Round 1) and sending them home. OpTic were able to keep their momentum going and swept eUnited, 2-0, moving onto Losers Semifinals.

XSET weren’t able to take down the Green Wall. They were defeated in Streets Oddball 2-1 and again in Live Fire Slayer 50-29, giving them an impressive fourth place finish after not qualifying for the first Pro Series.

For the second week FaZe and Cloud9 had found themselves facing off in Winners Finals. C9 managed to pull off a 3-0 sweep in the first Pro Series, but FaZe were determined to not let that happen again. Although they did not win the first map, Streets Oddball (2-1, C9), FaZe pulled out a W in map two, Recharge Slayer, 50-47. Bazaar CTF was up next and went to time witht the victory went to C9 who captured two flags to FaZe’s one. Live Fire Strongholds ended up being the final map in the series. Cloud9 were able to pull off a 250-216 victory and send FaZe down to Losers Finals where they would face OpTic Gaming.

After being relegated back to the Open Series after the first Pro Series (then receiving the Sentinels spot after SEN couldn’t play), OpTic found themselves one match away from being back in the Grand Finals. The team had not been in one since the second Open Series tournament. FaZe however, were runner-ups to C9 in last week’s Pro Series and would be looking to get back there to get revenge. Map number one was Aquarius CTF. FaZe were able to score all five flags while OpTic only scored one and went up 1-0 in the series. Bazaar Slayer was next and while OpTic was in the lead 38-18, Bound had disconnected. The two teams agreed on giving OG the win and moving on, rather than playing a shortened match that was obviously going to go in favor of OpTic Gaming. The third map, Live Fire Oddball, also went to OG after three rounds of play, but FaZe answered back in a dominant Streets Strongholds map, winning 250-63. Recharge Slayer was the fifth and final map where OpTic delivered the final blow to FaZe, winning 50-45 and ruining their hopes for a rematch against C9.

Flashbacks to the first two Open Series kicked in as OpTic Gaming and Cloud9 clashed in the Grand Finals again. After time expired it was C9 who won the first map, Aquarius CTF, 2-1. The next map, Live Fire Slayer, was heavily in favor of OpTic, but Cloud9 overcame the odds and took that map as well, 50-36. The best-of-five series would end after the third map, Streets Strongholds. OpTic put up a much better fight this time around than their previous match with FaZe, but were unable to secure the win, losing 225-250. Cloud9 are now back-to-back-to-back North American HCS Champions. 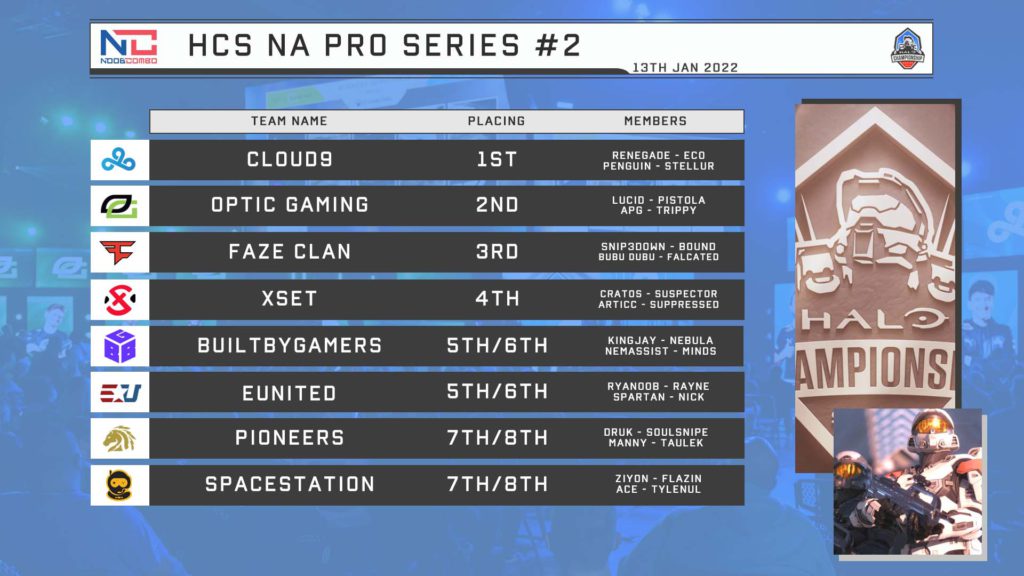 The talent for this weekend’s NA Super has been announced. Goldenboy has tweeted that he will unfortunately not be casting the tournament due to testing positive for COVID and still experiencing symptoms. We wish him […]

HCS has published their photo album from the Kansas City Major. The photos were taken by David “Sandman” Doran and Reece Martinez. We’ve posted some below but you can view the entire album over at […]

The HCS Major in Kansas City is currently taking place, where the best teams from around the world are competing against one another. Yesterday, the Open Bracket and Pool Play stages concluded and below you […]