Since last week’s ANZ Pro Series, some teams have made roster moves and teams moved around the Top Eight. However, they were no match for The Chiefs, who only dropped one map the entire tournament.

Dire Wolves were eliminated after a 1-2 loss against Frxgrs in Winners Round 1 and a 0-2 loss to 1620 Kings in Losers Round 1. Team Immunity suffered from internet issues and were unfortunately disqualified, giving them a 7th/8th place finish this week.

Divine Mind were also plagued by internet issues and had to take a loss in Losers Quarterfinals, ending their tournament. BBR, who took the only map off of The Chiefs in Winners Round 2 before losing 2-1, swept 1620 Kings 2-0 and moved on to Losers Semifinals.

CAT fans and BBR each took a map off of each other before BBR won the series, 2-1. They advanced to Losers Finals where they faced Frxgrs in a best-of-five series. The teams split the first two maps, but BBR went on to win the next two and the series.

The Chiefs sat atop their throne, waiting for their next challenger. This week it was BBR, who added Benjy and Juckor to join Adz and Bradlllzzzz on the roster. The first map of the Grand Finals was Aquarius CTF. The Chiefs managed to capture all five flags before time, while BBR weren’t able to capture any. Going into the second map, Recharge Slayer, BBR were determined to put up a better performance, which they did, but unfortunately suffered another loss 41-50. Only one more map was keeping The Chiefs from maintaining their dominance in the region and that map was Streets Oddball. The first round went to The Chiefs 100-27. BBR once again put up a better fight the second time around, but it was too little too late as The Chiefs took round two 100-68 as well as the series and tournament.

You can view the Top Eight results from the tournament below as well as find information on both the Open Series and Pro Series at their respective links. 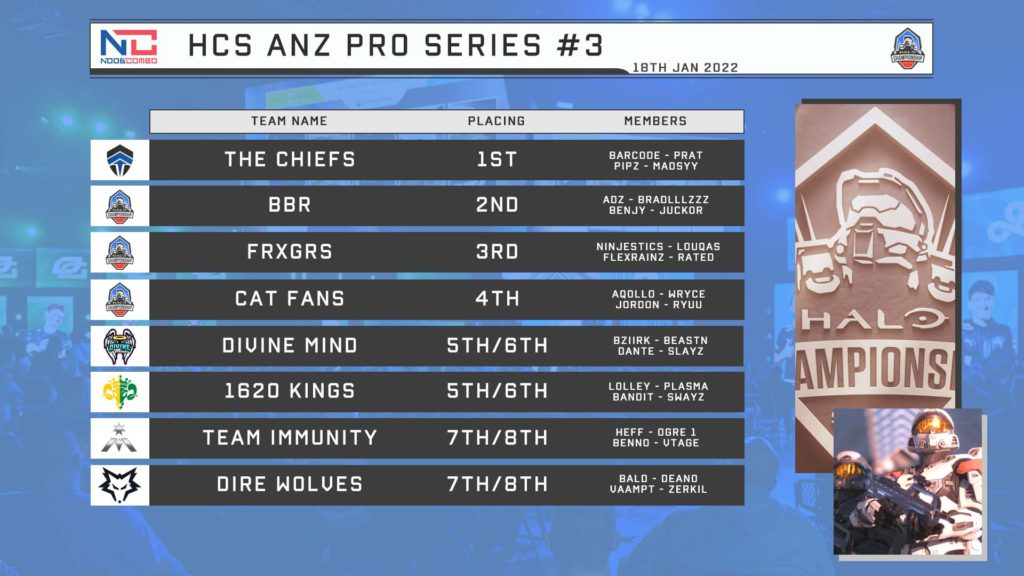 Another week of HCS FFA Series tournaments wrapped up today. The results from each region’s tournament can be seen in the graphics below. You can view round-by-round information by clicking on the links above each […]

Yesterday at the conclusion of the MX Super Qualifier, the Top Two teams secured themselves a spot in Pool Play for the MX Super Tournament. The Super will start next weekend on February 27th with […]