Acend, once again, are your champions of European Halo for the third week in a row. Shaady and the rest of the team will take the headlines, but there were other standout performances throughout the tournament that must get some of the spotlight!

It may have been three in a row for Acend, however it was the third week in a row that they had to play a different opponent in Grand Finals as HMCA stormed through the losers bracket to finish in the top 2 for the first time in the Infinite era.

HMCA certainly showed why they should be dining at the top table of EU Halo after defeating NAVI in an epic Losers Bracket Final making up for the loss to the same side in the Winners Bracket. They can also take a lot of positives from their performances in the next matchup putting some interesting amounts of pressure on Acend in Grand Finals but still coming out the wrong side of a 3-0 loss.

Acend seemingly can do no wrong and always find another gear when required to dig out a result. This was encapsulated perfectly as they snatched victory from the jaws of defeat in an epic Oddball encounter with NAVI by grabbing the ball with seconds to spare to take a one point win.

It seems NAVI have to go back to the drawing board. After an impressive showing at Raleigh and then a grand finals appearance in week one of the Pro Series they will be disappointed to take some steps back on their journey to get back to the summit of EU Halo.

Last week’s surprise outfit, The Lads, could only come up with a Top Four finish this week after their second place finish last week. They fell to HMCA, 2-0, and will be driven to reach the heights again next week.

Quadrant finished Top Six alongside WhoKnows, rounding up a strong Top Six with now five different teams appearing in an EU Grand Final in this short period of time since the game released.

Mockit will be disappointed they couldn’t build on last week’s Top Four placement after finishing in the Top Eight. However, the loss did come to HMCA who were on form it seems this occasion.

TYSK will be happy with a break into Top 8 and booking their ticket already for the next Pro Series. The rest of the pack will have to go again this weekend as the EU Open Series returns for a fourth week. In the meantime expect to see all the major teams in EU Halo scrim against one another to try and build on their performances to somehow topple Acend.

The biggest question though it seems in the European community is ; “How do you solve a problem like Acend?” 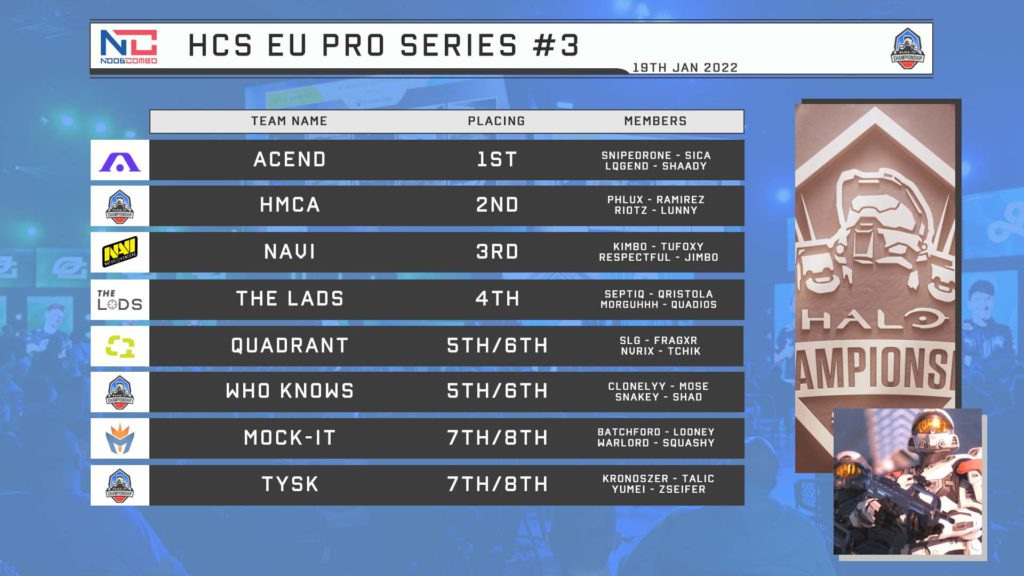 Tashi teased us months ago, telling us that there will be a Halo Infinite event this year and today, the moment we’ve been waiting for arrived. HCS has announced the first Major for Halo Infinite, […]

Some regions may be taking a break from the Open Series because of the upcoming MX Regional and NA Super, but the FFA series is maintaining its course. You can find the final results from […]