OpTic Gaming found themselves in the Grand Finals against the NA titans, Cloud9, once again in this week’s NA Pro Series while FaZe Clan watched from the sidelines for the second week in a row.

OpTic found themselves in the Losers Bracket after receiving a 0-2 loss from G2 in Winners Round 2. They went up against Spacestation Gaming and defeated them 2-0 while the other Losers Round 3 matchup, Sentinels vs Kansas City Pioneers, went the way of KCP 2-1.

eUnited was OpTic’s next opponent. They were sent to Losers Round 4 by C9 and then sent home after OpTic took the series 2-0. G2 had suffered their first loss to FaZe and went up against KCP in the same round. They unfortunately received their pink slip from the tournament after KCP beat them 2-0.

KCP now found themselves in Losers Semifinals, guaranteeing their best Pro Series placement yet in Top Four. OpTic was no stranger to being in the same position and showed it, defeating KCP 2-0.

Cloud9 and FaZe Clan went head-to-head in Winners Finals for the second week in a row, but this time C9 were able to make the 3-0 sweep which put FaZe into Losers Finals against OpTic, also for the second time in a row.

Two familiar teams to the Grand Finals, OpTic Gaming and Cloud9, clashed once again for the Championship. Aquarius CTF was the first map and went to time with C9 winning 2-1. OpTic fought back in map two, Recharge Slayer, but it wasn’t enough as they lost 45-50. C9 put the nail in the coffin in the third map, Streets Oddball, winning two rounds to none and remaining the kings of the HCS.

You can view the brackets from the Open Series and Pro Series at the links provided and view the Top Eight below as well as the VOD. 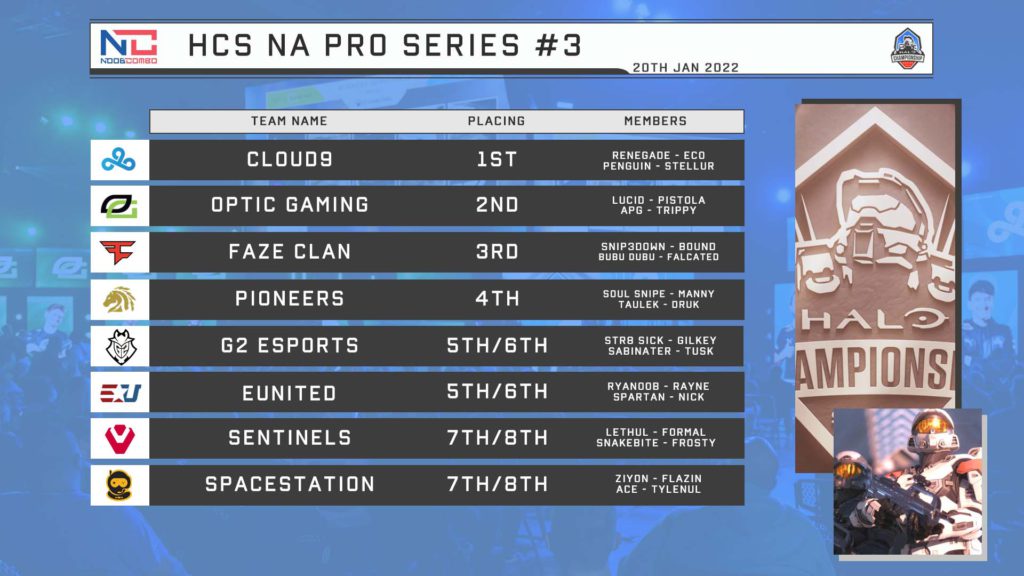 Each region’s results from this week’s HCS FFA Series can be found below. You can view round-by-round information by clicking on the links above each graphic. The series continues next Monday, March 21st. ANZ 3/14 […]

EDIT: Royal2 has released a statement in a TwitLonger stating that he did in fact change his server settings but forgot to change them back before the tournaments. After the NA Raleigh Kickoff Qualifier, teams and […]