The Chiefs went out with a bang before the Pro Series break. They won this week’s ANZ Pro Series, which was the last one until May 31st. Don’t worry though. In between now and then are some Open Series tournaments as well as the ANZ Super and Kansas City Major.

Team Immunity underwent a team change, replacing OGRE1 with Junior. The new roster had some growing pains, as they were knocked out of the tournament after receiving losses from Dethruptor Fans and BBR. Malicious were also eliminated in Losers Round 1. They lost to Divine Mind and Dire Wolves.

Divine Mind went up against last second place team, BBR, in Losers Round 2 and were able to pull off a 2-0 sweep. Also sent home in LR2 was Dethruptor Fans. Their series went to a game 3, but Dire Wolves were able to pull out the victory.

Losers Semifinals saw Divine Mind up against Dire Wolves. The two teams have not played each other since the second Pro Series where Divine Mind came out on top. They were able to do it again, defeating Dire Wolves 2-1.

In Winners Finals, The Chiefs beat Demons 3-0, sending them to Losers Finals to play Divine Mind in a best-of-five series. Map 1 was Bazaar CTF and went to time. DM were able to capture two flags to Demons 1 and get the W. The second map was Live Fire Slayer. It was close, but Divine Mind were again able to win 50-48. Streets Oddball was map number three. Round 1 went to Divine Mind, 100-72. Demons were up 94-11 in Round 2 until DM made an 89 point comeback and also took that round as well as the series.

Once again, Divine Mind saw themselves in the Grand Finals with The Chiefs. DM has fallen short each time they faced and they were looking to change that this time around. The first map was Aquarius CTF. Divine Mind were able to take it after the game went to time, 2-1. Bazaar Slayer was the second map which went the way of The Chiefs, 50-35. Up next was Recharge Oddball. The Chief saw themselves with a 1-0 lead in the game after a score of 60-49 in Round 1. They dominated Round 2, winning it 100-0, giving them the series and tournament victory once more.

You can view the Top Eight results and VOD below. For more information on this week’s Open Series and Pro Series, click on their respective links to head to FACEIT. 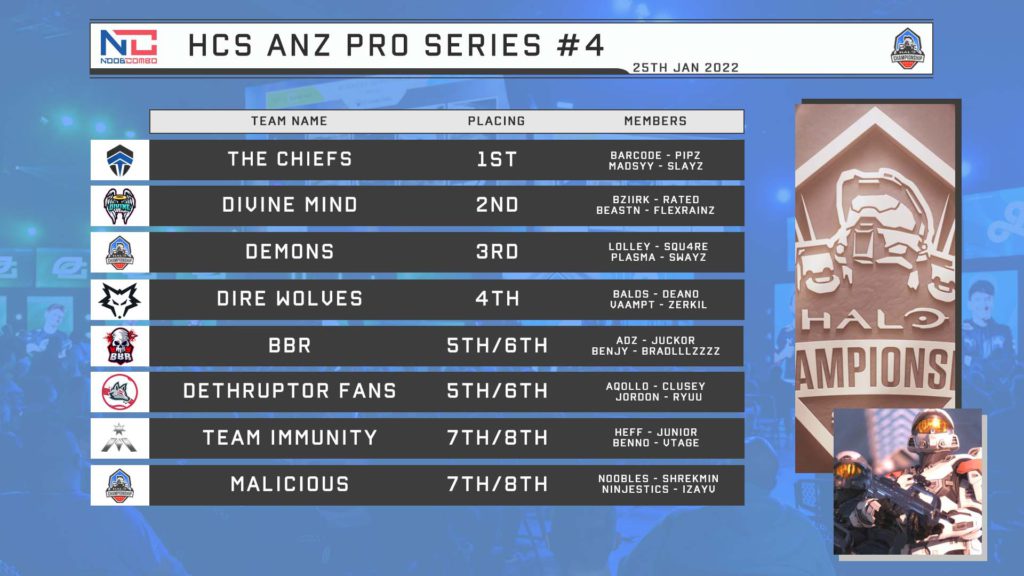 This week’s FFA tournaments had a different prize than previous. The winners of this week’s tournaments will receive travel coverage to the HCS Major in Orlando, taking place from September 23rd through 25th. The final […]

The HCS FFA Series continued today with tournaments taking place for every region. We’ve posted the top eight results from each tournament for you below along with links to their respective event pages on FACEIT. […]