PK started the tournament with the dominance they’ve shown in each Pro Series so far, reaching Winners Finals undefeated. Meanwhile, Timbers Esports had a little bit of a rougher start going to a third map against Altar Esports, but winning 2-1. Rebel were also able to make it to Winners Semifinals, beating CintaNegra 2-0 in Winners Round 1.

In the Losers Bracket, Altar Esports asserted their dominance over CintaNegra, then faced FNI who, in a very close series, pulled out the victory 2-1. DreamConspiracy, after losing to PK in Winners Round 1, defeated New Bloods in Losers Round 1, winning 2-0. They faced Rebel in the next round where they fell 1-2 and were eliminated.

The Rebel vs. FNI matchup in Losers Semifinals was very close, but Rebel were able to take the win (2-1) and get the opportunity to face Timbers Esports, who had lost to PK in Winners Finals.

In Losers Finals, Timbers Esports won a tough matchup, 3-1, against Rebel and once again earned a rematch against Pittsburgh Knights. The Knights lost one map in the best-of-five series, but maintained their undefeated Pro Series record. They beat Timbers Esports once again, 3-1.

You can view more information from both the Open Series and Pro Series tournaments at the links below. The Top Eight from this tournament and VOD are also available for you. 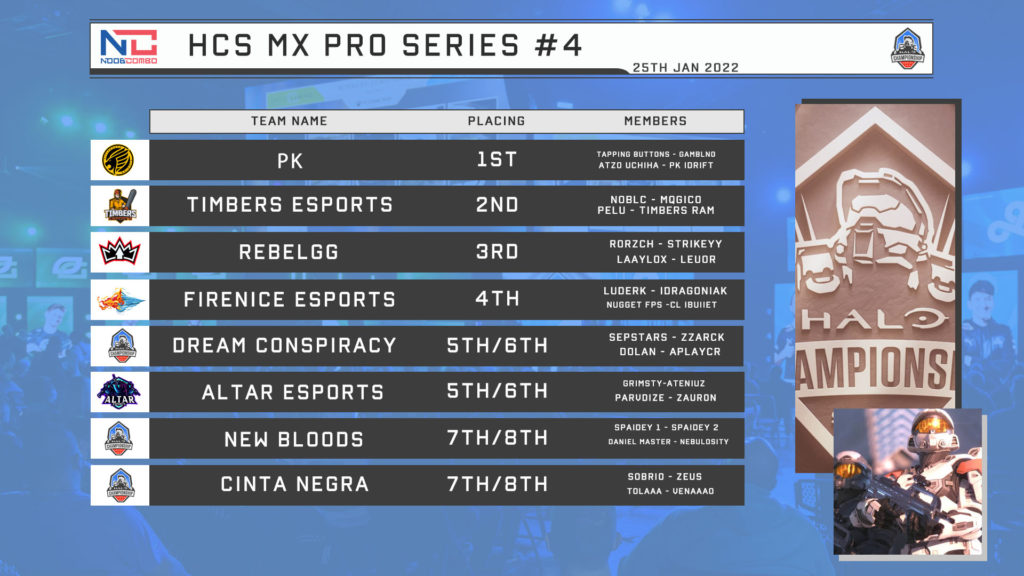 During the Halo World Championship, HCS gave us a preview of what the roadmap for the next year of HCS is looking like so far. Finishing off the 2022 calendar year will be the OpTic […]

While the MX region prepares for their Regional Championship and NA gets ready for their upcoming Super, the ANZ and EU regions had their Open Series today. You can view the results from each of […]