Week Four of the NA Pro Series left us with one question. Are Sentinels returning to their past form?

The former Halo World Champions faced G2 in Losers Round 3 and were able to complete the 2-0 sweep, eliminating G2 from the tournament. Joining G2 with a Top Eight finish was Spacestation Gaming, who were able to take one map off of XSET, but ultimately fell 1-2.

Sentinels moved on to Losers Quarterfinals face Raleigh Major runner-ups, eUnited, after they took their first loss to Kansas City Pioneers. After losing the first map, SEN were able to take the second two and the series. Meanwhile OpTic Gaming, who lost their Winners Semifinals match against FaZe, pulled off a 2-0 victory against XSET.

Unfamiliar with making Losers Bracket runs, OpTic was now up against Sentinels in the Losers Semifinals. Unfortunately for them, Sentinels were playing great and won Recharge Oddball, 2-1 and Aquarius Slayer, 50-32.

For the third week in a row, FaZe Clan faced Cloud9 in Winners Finals and for the third week in a row, Cloud9 came out on top. However, the series was closer than it looks. FaZe took the first map, Recharge Oddball, 2-0, but C9 answered back winning Live Fire Slayer, 50-47. The third map was was Streets Strongholds and went to C9, 250-217, as well as the fourth map, Aquarius CTF. C9 also won that 4-3 and moved on to the Grand Finals again.

This put FaZe up against Sentinels in Losers Finals. FaZe has been in the position multiple times this season and were the favorites going into the series. The first map was Recharge Strongholds which FaZe took handedly, 250-123. Sentinels followed up by pulling out a victory on Aquarius Slayer, 50-48. Bazaar CTF was the third map and went to time with FaZe winning 2-0. The fourth map was Live Fire Oddball which Sentinels needed to win to stay alive and they did just that, winning 2-1. It was do or die for both teams. The fifth and final map was Streets Slayer and after the two teams went at it, the map went to Sentinels winning 50-46.

The best team from Halo 5 were in their first HCS Pro Series Grand Finals against the current best team in Halo Infinite in a best-of-five series. SEN came out hot, taking Live Fire Strongholds 250-154. Cloud9 were able to take the next two maps, Recharge Slayer (50-41) and Bazaar CTF (5-0). Streets Oddball was map number four and went to a third round, but C9 once again were victorious and remained Champions.

You can view the Top Eight placements in the graphic below and if you missed the tournament the VOD is available too. You can view the brackets from this past week’s Open Series and Pro Series at their links. 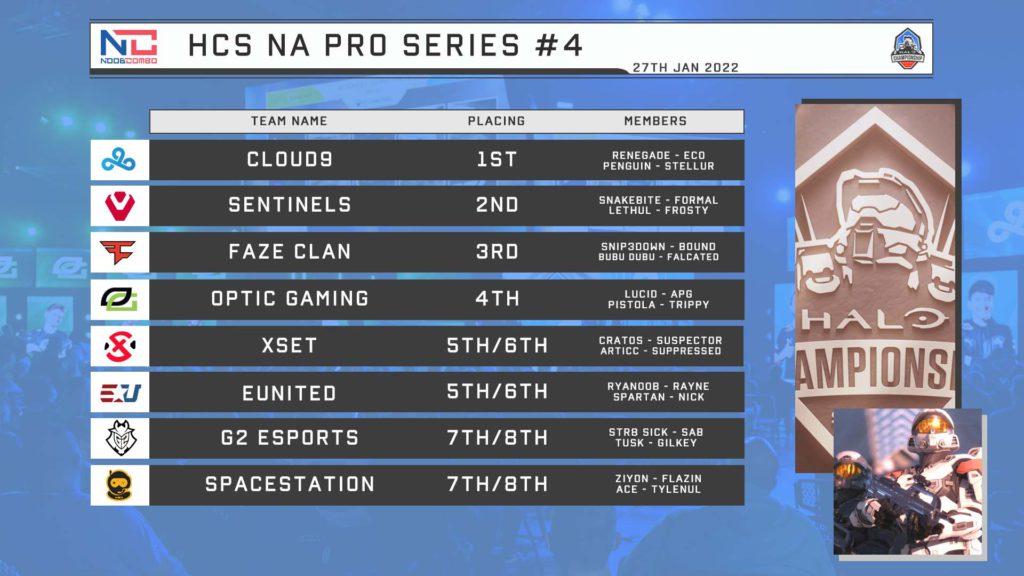 The announcements keep on coming. Today, HCS announced the Top 25 Greatest Players of All Time, a series of videos celebrating the franchise’s best players as voted on by a panel of commentators, analysts, and […]

Tashi teased us months ago, telling us that there will be a Halo Infinite event this year and today, the moment we’ve been waiting for arrived. HCS has announced the first Major for Halo Infinite, […]

While the EU region is preparing for their Regional at DreamHack Valencia, the ANZ, NA, and MX regions have been duking it out in the HCS Open Series. Below are the top eight teams from […]