After four Qualifiers, the top eight teams of the Lady Spartan Pro Series battled it out over the weekend in the LSPS Championship. Day One consisted of Pool Play, where the top two teams from each pool advanced to the double-elimination Championship Bracket, which played out on Day Two. The tournament had a $10,000 prize pool awarded to the top four teams. You can check out the Top Eight from the Championship in the graphic below and view the brackets as well as Pool Play results over at the event’s page on Start.gg. If you missed out on the broadcast, you can watch the VOD at Xbox’s Twitch channel or UMG’s Twitch channel. 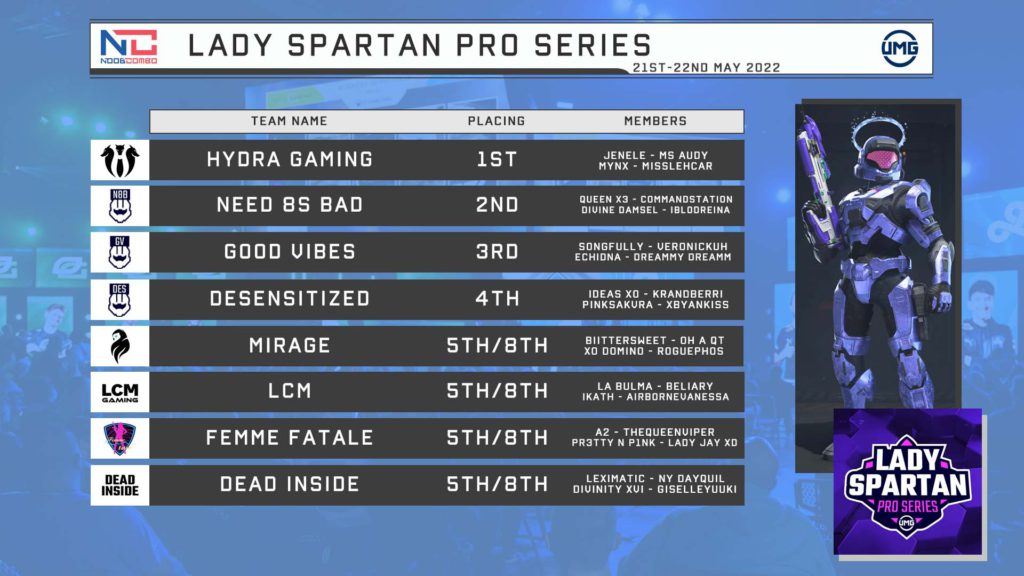 The second qualifier for UMG’s Lady Spartan Pro Series has wrapped up and after some awesome matches (including a bracket reset in the Grand Finals), Hydra Gaming remains on top. You can view the Top […]

The Qualifiers have ended and all that’s left is the Championship in UMG’s Lady Spartan Pro Series. Yesterday, the fourth and final Qualifier concluded and teams got their last chance to try and earn as […]

The first week of the inaugural Lady Spartan Pro Series from UMG Gaming wrapped up yesterday with the finals taking place. The Top 8 teams competed in a double-elimination bracket for LSPS Points and a […]