The best the MX region had to offer competed over the weekend in Mexico City. The MX Regional Championship had the biggest turnout in the region’s Halo history and also featured the largest prize pool the region has seen, $50,000.

The event started off with the Open Bracket and Pool Play. Pittsburgh Knights and Chosen Squad had qualified for Pool Play from their placings at the Kansas City Major while CintaNegra Esports and Timbers Esports qualified via HCS Points. CintaNegra X and CN Nubis secured their spots in Pools by finishing Top Two in the MX Regional Qualifier. The final two Pool Play spots were earned by Altar Esports and CintaNegra Adey after finishing Top Two in the Open Bracket.

As most predicted, Knights and CintaNegra Esports finished atop their pools, starting them off in Winners Round 2 of the Championship Bracket. CintaNegra X, Altar Esports, Timbers Esports, and CN Nubis were placed into Winners Round 1 with CintaNegra Adey and Chosen Squad starting off in Elimination Round 1 along with the 3rd/4th placed Open Bracket teams, Team SMOG and Last Chance.

Chosen Squad and Team SMOG advanced to Elimination Round 2 after sending home Last Chance and CintaNegra Adey. They faced Altar Esports and CintaNegra Nubis, who had lost their Winners Round 1 matchups, and unfortunately had their tournament lives end with both losing their series.

In Winner’s Round 2 there was a civil war between CintaNegra Esports and CintaNegra X while Timbers Esports faced off against the number one team in the region, the Knights. CintaNegra X and Timbers both lost their series, dropping them to Elimination Round 3.

CintaNegra X were able to defeat Altar Esports 3-0 as well as Timbers also sweeping CN Nubis, 3-0. The two winners competed against one another in Elimination Round 4, where Timbers Esports defeated CintaNegra X, 3-1, and secured themselves a Top 3 spot as well as a Pool Play spot at the upcoming Orland Major.

In Winners Finals, CintaNegra Esports were up against the Knights, who had previously only lost two times on a broadcast this season. Knights came out swinging in Live Fire King of the Hill, winning Map 1, 4-3. CintaNegra answered back with a flurry of punches, taking Recharge Slayer (50-48), Catalyst CTF (3-1), Recharge Strongholds (250-199) and the series, wounding the Knights.

They may have been down, but the Knights weren’t out. Their challenger in the Elimination Finals was Timbers Esports. However, Timbers proved to be no match for the Knights as they were eliminated after losing Live Fire Oddball (2-0), Catalyst Slayer (50-42), and Streets King of the Hill (4-0). Although finishing third is not what Timbers Esports wanted, the bright side is they’ll be heading to Orlando.

Pittsburgh Knights got their rematch against CintaNegra Esports. The Grand Finals was a best-of-seven series, but for PK they’d have to reset the bracket and win a second best-of-seven in order to keep the throne.

CintaNegra struck first, winning Bazaar CTF 3-2. The Knights answered back in Map 2, taking Live Fire Slayer 50-37. Streets King of the Hill was the third map and went the way of CintaNegra, 3-1. In a nail-biting Round 3 finish, the Knights won the fourth map, Recharge Oddball 2-1. For the first time in the series, a team won back-to-back maps and that was the Pittsburgh Knights winning Map 5, Catalyst Slayer, 50-45. CintaNegra tied the series after Map 6. They won Live Fire Strongholds, 250-181, bhe Knights weren’t going to go without a fight. After winning Map 7 (Recharge Slayer) 50-37, they reset the bracket.

Keeping the momentum going, Pittsburgh Knights took the first map, Recharge Strongholds, 250-161 and the second map, Streets Slayer, 50-44. That momentum was halted after CintaNegra took Map 3 Live Fire King of the Hill, 4-3. Catalyst CTF was up next and PK fired right back, taking the map 4-3 and were only one map away from claiming the throne. Recharge Slayer was the fifth and final map where the Knights proved once again that they are the best team in the MX region, winning 50-42.

Below you can find the Top 8 teams from the tournament. 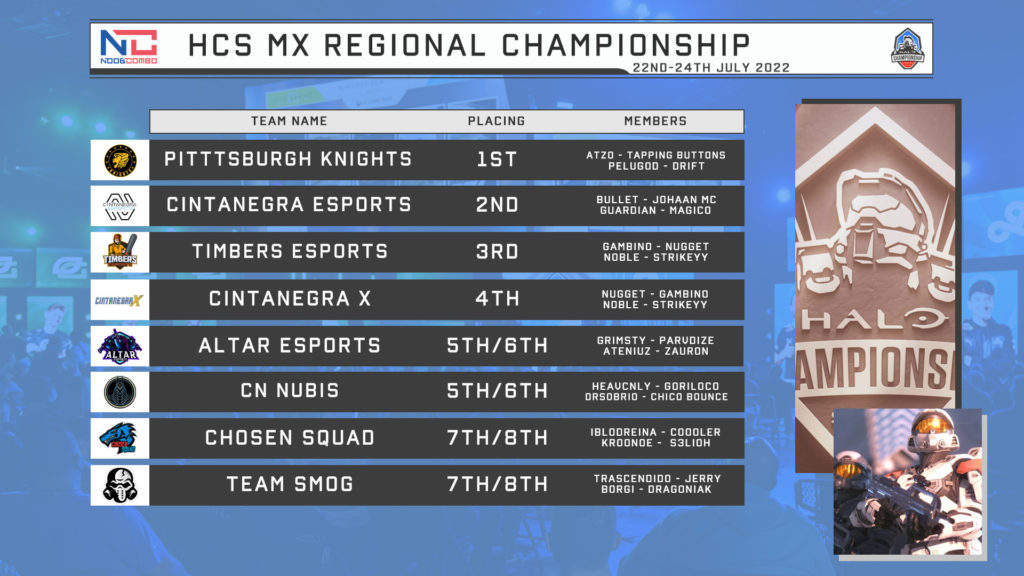 If you thought this past weekend would play out exactly the same as the previous one.. well.. you’re not completely wrong, but the journey to get there is a bit fiercer! Winners Quarter-Finals Cloud9 (The […]

Team passes are now available for purchase for the Orlando Major. The tournament takes place from September 23rd to September 25th at the Orange County Convention Center in Orlando, Florida and has a $250,000 prize […]