The tournament started on Thursday with the Play-In Stage. The top two teams from each region outside of HCS Orlando’s top 12 teams were each given a shot at competing for one of the final four Pool Play spots. The rest were sent home.

Complexity was put in Pool A, JLINGZ into Pool B, FNATIC into Pool C, and Acend into Pool D. The top three teams from each Pool earned a spot in the double-elimination Championship Bracket while the fourth placed team was eliminated from the tournament.

The Pools played out as most expected, except for a thrilling Game 5 upset from JLINGZ Esports against Team WaR, who had made an amazing run at HCS Orlando. All of the teams that qualified from the Play-In Stage with the exception of Complexity were able to keep their head above water and make it to the Championship Bracket. NAVI’s, TSS Esports’s, and Team WaR’s time at the Halo World Championship had also come to an end.

On Saturday, the Championship Bracket began. Two-time World Champions, Sentinels, started off with a quick 3-0 against G2 Esports while Gamers First suffered the same fate against OpTic Gaming. The next two matches started the wildness that Saturday would bring. The first was Native Gaming Red vs Cloud9 which resulted in the first upset in the Championship Bracket. The match went the distance and Native sent Cloud9 to the Elimination Bracket much earlier than everyone expected. Meanwhile, a grudge match went on with former teammates that had some”bad blood.” FaZe Clan went up against eUnited who took FaZe to the second Game 5 of the day, but unfortunately fell short and would now had to make an Elimination Bracket run.

Elimination matches started next with G2 Esports taking on Oxygen Esports. G2 had been looking better after the acqusition of ANZ’s number one player, Barcode, but so were Oxygen after grabbing former Spacestation Gaming player, Kuhlect. The match also went to a fifth and final map with Oxygen coming out on top, ending G2’s tournament life. At the same time on the Main Stage, Gamers First (G1) faced FNATIC. G1 has improved tournament after tournament this season and quickly became a fan-favorite while FNATIC had been struggling all year to find success. For the fourth match in a row, FNATIC took G1 to a Game 5 and pulled off the second upset of the day, defeating Gamers First.

After making it out of Pool Play as the third teams, the last of the teams from the EU region, Acend and JLINGZ Esports, started and unfortunately ended their time in the Championship Bracket at Elimination Round 1. Only able to take one map off of Cloud9, Acend were defeated in Game 4 while eUnited swept JLINGZ, 3-0. Only North American teams remained in the tournament.

Elimination Round 2 started with Oxygen Esports against FNATIC. Oxygen, who started their Worlds run qualifying from the Open Bracket at HCS Orlando and finishing Top Eight at the event, guaranteed themselves another Top Eight finish after beating FNATIC, 3-1, and sending them home. The second matchup of the round was Cloud9 vs eUnited. The fact that one of the two of these teams would end the HWC with a Top Eight finish was a shock to many and unfortunately for eUnited it was them, losing 3-0.

Up in Winners Semifinals, two titans collided with OpTic facing Sentinels. After winning 3-2 in Live Fire KotH, Recharge Slayer 50-46, and Streets Oddball 2-0, the Green Wall prevailed, moving onto Winners Finals and sending Sentinels down to Elimination Quarterfinals. The other matchup, FaZe Clan vs Native Gaming Red, added fuel to the fire of craziness that was already raging day one of the Championship Bracket. After going back and forth between the first four maps, Native pulled off yet another upset and beat Faze 3-2.

Championship Sunday kicked off with Elimination Quarterfinals. Sentinels took on Cloud9 and FaZe Clan faced off against Oxygen Esports for their tournament lives. Sentinels ended up coming out flat, were swept 3-0, eliminating one of the top heavy-hitters from the tournament. FaZe Clan also had their brooms out and closed the book on Oxygen’s Cinderella story, sweeping them 3-0 as well.

Cloud9 and FaZe Clan went head-to-head in Elimination Semifinals. The classic Red vs Blue teams clashed in Streets Oddball (C9 2-1), Recharge Slayer (FaZe 49-48), Catalyst CTF (C9 4-2), and Live Fire Strongholds (C9 250-151). FaZe would have to watch the rest of the tournament from the sidelines as Cloud9 would move on to Elimination Finals where they would face Native Gaming.

The boys in blue started off the series by taking Streets KotH, 4-3. After an intense standoff, Cloud9 also took the second map, Catalyst Slayer, 50-47. The third and final map was Recharge Oddball where C9 got their revenge as they ended Native’s run and sent them home with a third place finish.

It was only fitting that Cloud9 found themselves back in the Grand Finals once again. The team had been in every Grand Finals at every LAN this HCS season and their opponent in this one was appropriately OpTic Gaming. The HCS Season started with an OpTic/C9 Grand Finals during the first tournament and we would now see the two heavyweight’s close it out. It would be no easy feat for Cloud9 though as they would have to win two best-of-seven series.

Catalyst CTF started things off and went to OpTic, 3-2. C9 would answer back in Streets Slayer, winning 50-45 and turn on the jets. They went on to win Live Fire KotH 4-1, Recharge Strongholds 250-154, and Aquarius Slayer 50-38. Cloud9 saw success in the first series and it was time for them to try and do it again.

It was the first bracket reset at a major LAN this season. Both teams took a short break before the start of the second best-of-seven series, which began with Recharge Oddball. After trading rounds, OpTic came out with the victory, winning 2-1. It seemed like Cloud9’s jets ran out of fuel, as Catalyst Slayer was next and OpTic delivered them a steak, winning 50-30. The Green Wall, which had started to be dismantled after the first series was being rebuilt, brick by brick. OpTic went on to win the next map, Live Fire Strongholds, 250-173, and after a small pre-celebratory blunder, Streets KotH, 3-2. OpTic Gaming are the 2022 Halo World Champions. 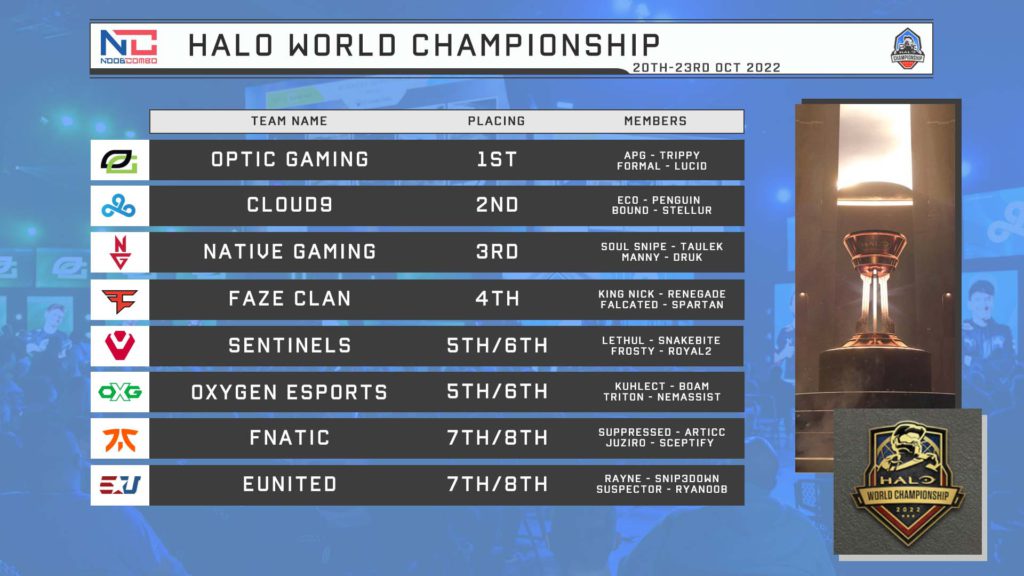 The Halo World Championshp in Seattle, Washington is just around the corner and before Pool Play can conclude and the Championship Bracket begin, the Play-In Stage has to finish. Taking place the first day of […]

HCS has announced who will be calling and analyzing the action next weekend during the Halo World Championship. The Championship begins next Thursday, October 20th. You can catch all of the matches across Halo’s Twitch […]

HCS has relesaed the Pools for the Halo World Championship. The tournament starts on October 20th in Seattle, Washington with the Play-In Bracket. Pool Play starts October 21st. Which pool do you think is the […]